I started concealed carry with a short barreled Ruger Super Single Six with a bobbed barrel (I’d say a scientific about 1.5” barrel), semi-bobbed and smoothed hammer and no sights. I would tuck it into my hip pocket or up front either appendix or cross draw and wear it canted and tucked in all day. I recognize that a bob-barreled, no-sighted, single action 6 shot 22 magnum isn’t the best self-defense weapon, but I was incredibly poor (so I shot 22 LR out of it mainly), loved that Single Six, and practiced with that gun until I could bounce a pop can or dry cow pie within 50 feet with all six shots by thumbing the hammer with my left hand, holding the trigger down with my right, and keeping the gun moving with the target. From there I got other jobs, made more money, and quickly moved to Mexican packing revolvers wherever they were most comfortable, which was usually tucked into the front of my pants with a little cant.

So the transition over the years to a modern pistol in appendix was super natural. For years I didn’t realize there was such controversy over this, which is a horse that has been shot dead, then passed to the other side which flogged it with vigor, then back to the side that shot it in the head to begin with, and so on and so forth. I’m not getting into that. Everyone should carry, I don’t care how (to a point), and don’t really care what you think about how I carry. This article is for big guys who either are into appendix, or are thinking about trying it. I want to address two things: a) nothing under the sun is new, and b) few of the current crop of appendix holsters are not made for comfortable carry.

Nothing under the sun is new

I continually come back to the realization that we have lots of time for baloney mental activities, and that the old ways of doing things are typically faster, easier, cheaper, and more comfortable. I believe appendix as we call it falls into that category as well (at least faster, easier, and more comfortable). This current round of hand wringing about “it’s not safe” or “you’ll shoot your nuts off” has about as much convincing power as Ralphie’s mother on Christmas Story, because it’s the same argument. “Danger! Danger! Danger!” News flash, guns are dangerous even though they now have more built in safeties than even John Browning would have imagined. I think we can all agree that handguns from the blackpowder era through single actions were significantly more dangerous to the user than the vast majority of handguns fielded in concealed carry today. However, as you can see with a quick internet search there were many practitioners of some form of inside the waistband carry of either things that shot or things that sliced. 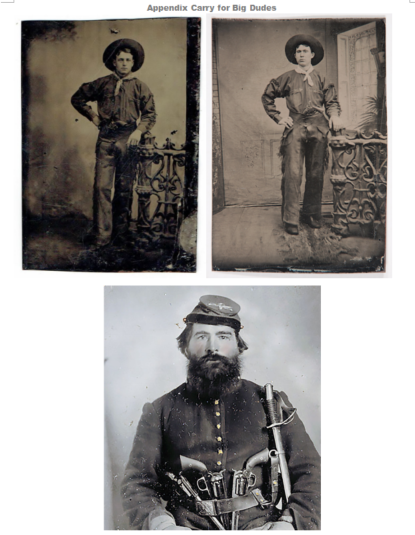 I hope we can recognize that carrying weapons that are intended to be used to kill other people have been carried in front of the body since probably the first caveman stuffed a femur into his loincloth to go kill his cross-cave rival. Why? Ockham’s razor: it’s easier, faster, and more comfortable.

On to point 2b! Most of the current crop of appendix holster are not made for comfortable appendix carry. They look like they would have the same level of comfort as if you stuffed a section of 2”x6” pine in the front of your pants.

The following pictures all depict holsters very similar to those I’ve tried in the past. I just ripped the pics off the net, I don’t know the makers, so nobody get their panties twisted. I’ve circled in red some of the edges or points that caused discomfort for me when sitting or driving for extended periods of time. 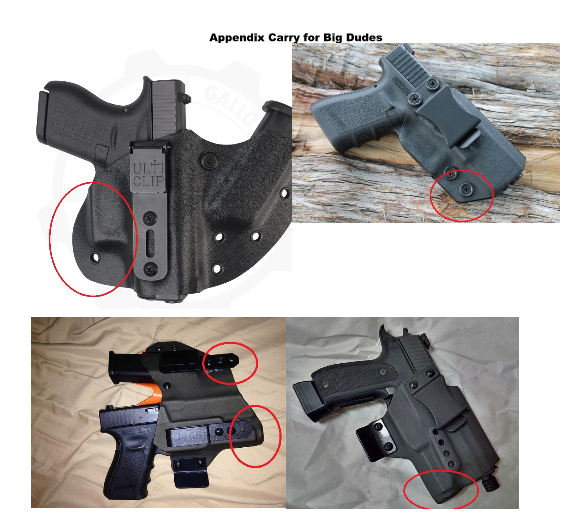 I have a friend who has been a custom boot maker for years and describes spots that cause discomfort as “hot spots.” That is the perfect way to describe appendix holsters that look cool, but have either sharp or thin-on-the-edge portions that cause hot spots in private spots. I’ve had even the bottom end of the belt clips circled above create these hot spots. I find it typically starts to get pretty uncomfortable right at the junction of my pelvis and right thigh/hip flexor region or right above the base of the essential equipment, if you’re picking up what I’m throwing down. Below are my two preferred holsters, both by Gypsy EDC. The major advantage I’ve found to these over either double attachment point or one single large attachment method is the holsters are able to cant with normal use and a big dude physique.

Everything nice and smooth, no sharp edges. The pictures make the edge look jagged, but they are just worn smooth from carrying. Here’s how the pistol sits. 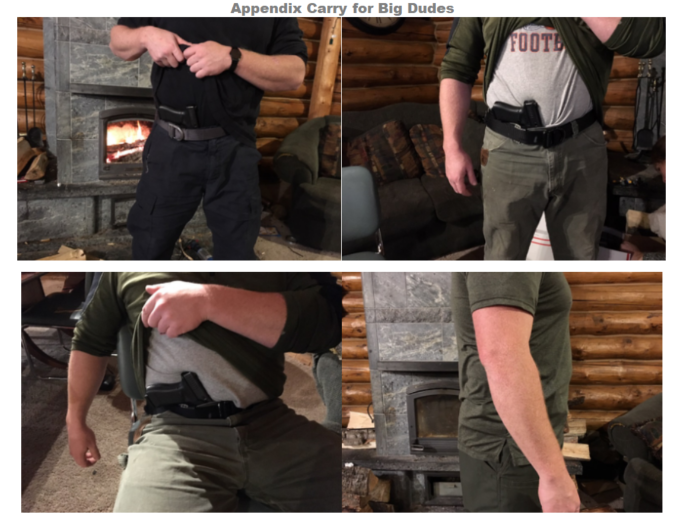 I’m a big dude. 6’1”, 255lbs, and technically “morbidly obese” according to the union physical scale I used to participate in when I was a boiler welder. I played college football and all the twisted steel and sex appeal has turned into 6 kids, a job that doesn’t entail working out twice a day, and I can still appendix all day long without any issue at all. So I often wondered why people who were significantly skinnier than me would complain about the discomfort of appendix. I believe the reason they experience this is because they are either using holsters from makers that don’t actually pack appendix but are trying to capitalize on the market trend, or they have one that doesn’t have the position/movement to mimic Mexican carry. I don’t know a person who has just stuffed a pistol down their pants and complained of discomfort. Like Greg Ellifritz said, “Thousands of Thugs Can’t Be Wrong.”

In closing, if there are any big dudes out there that have wanted to pack appendix but are being poo-pooed, ignore the naysayers whose only argument is that it is unsafe. No shit. Guns are dangerous like a big, strong dog or fast car. They’re not for everybody and having a pet lab isn’t the same as having a trained Belgian Malinois or Caucasian Shepherd Dog.

On the comfort side, get a holster that is as small as possible, wear it, and when pain points arise grind them off and polish smooth. Be less concerned with having to reholster the weapon than how it rides and presents, because comfort is paramount. I will take a holster that is comfortable but might be marginally slower on the draw (such as the the MCH or BONES) and might even preclude reholstering but I have it all day long baby, rain or shine, driving or walking.

×
Apprx 30 day lead time on ALL kydex orders UP TO A 200 day lead time on ALL KNIVES Purchase and/ or use of our products constitute acceptance of our liability waiver!!! You agree to hold harmless Walking B Ranch LLC/ GYPSY EDC for any, and all personal or property injury arising from the use, or misuse of any of our products. Guns and knives are tools that put holes in things, don't be stupid!!! This liability waiver extends to heirs, and assignee's in perpetuity!!! ALL RETURN ITEMS SUBJECT TO A 25% RESTOCKING FEE, CUSTOM ORDERS MAY ONLY BE RETURNED AT OUR DISCRETION, ANY RETURN MUST BE COMPLETE AND IN NEW CONDITION NOT RESPONSIBLE FOR LOST OR STOLEN PACKAGES